Here it! At long last we get to spend 24 hours sharing our love and appreciation of the wonderful Swords & Wizardry retro-clone!

So I've been rattling my mind with what to do for today for weeks. Honestly I couldn't decide, but ultimately, I decided that I would just share my love of this game, and two of the incarnations specifically with everyone.

First though, lets get the business out of the way! Remember today, and today only! 4/17/13
Go to http://www.talesofthefroggod.com/products.html and enter the discount code SWApprDay for a 25% coupon on all Swords & Wizardry product.

The same deal is being offered at http://shop.d20pfsrd.com/collections/swords-wizardry-appreciation-day with the code SWAD252013

With that out of the way, let me begin with my history of Swords & Wizardry.

I was getting into the OSR for a couple of years before I found S&W. I was honestly completely uninterested in S&W at the time. I couldn't see what people liked about OD&D. The layout didn't appeal to me, and honestly, I just didn't give it a chance. I also wasn't into basic at the time either (despite that I owned Holmes, and helped proof read Holmes 77), so that probably helps explain why. I was really into 1e and 2e, and was pretty happy where I was.

Fast forward to the release of S&W: Complete. I started talking to Chrispy about it, and Save or Die reviewed it right as I received mine. I read just like a 1e lite, ignoring all the rules I didn't use, and lowering the power level how I wanted to. Not to mention, the Monk class works!

Soon after this I went to North Texas RPG Con, ended up buying a copy of B/X and BECM (still don't own Immortals sadly) and began falling for all flavors of classic. When I returned my players ended up retiring their characters in our 1e/2e hybrid so we moved over to S&W: Complete. They really liked the transition, no longer having to worry about the crunchy bits we didn't like, and simplifying the rules, since only one of them owned a PHB.

This leads me to my S&W Complete experience: 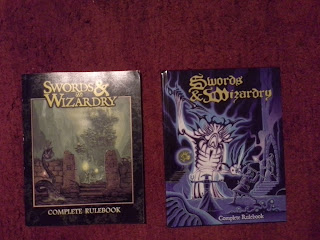 I have the most experience running and playing Complete out of the 3 flavors. It is currently my go to system for D&D campaigns. I personally feel it has enough crunch to satisfy me (when I want crunch) and my players (who always do it seems), without bogging down the game. There are plenty of options to choose from. Complete is basically OD&D + Supplements + Strategic Review. Matt Finch does a great job giving alternate rules in the system, and explaining where rules did, or didn't come from. This system has everything I want as an AD&D player, and enough stripped out to fill the classic side of me too. I've played in quite a few Complete games, run by JD Clement (who is a great DM by the way!), and ran a couple of my own, plus a few short adventures, like my current playtesting of R.C. Pinnel's conclusion to the Giants Series. With this version, I honestly don't feel any need to go back to AD&D. Now, I would never turn down playing some AD&D, but I would definitely prefer to run S&W: Complete for that fix!

I can't speak highly enough of my experience as both a DM and a Player with this set of the rules.

With the recent kickstarter, I managed to grab some goodies for it too. The screen is great, but less useful if using Ascending AC, as the left two panels are to-hit charts. 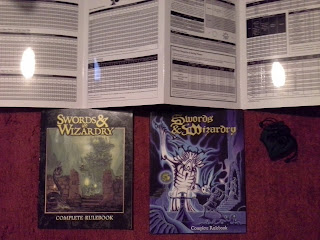 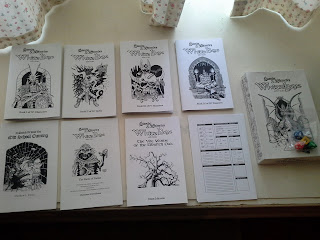 My new love affair is OD&D. And by this I mean the little brown books. I recently ran my first Swords & Wizardry: White Box session, as you may have seen earlier on this blog. I had such a blast running it and had never felt so free as a DM. The White Box rules are so lightweight (just barebones D&D), and is really made for you to home brew all your own stuff with it (as OD&D really was too). This mentality has really grown on me, and I have been spending the time to acquire my own set of OD&D books (I've only managed to snag M&T & Greyhawk so far though).

My first time running it, I think my players really liked it. They're the same group where only one player owned a PHB that I discussed earlier. I think the fact that all you really use is a d20 and a d6 helps resolve everything so much faster in the group. I rarely had to explain anything, and any on-the-fly ruling was easy as pie. I have run another session since then, that also went quite well. The players didn't enjoy it quite as much, as I was prepared for everyone to show up, I was going to run the same adventure for the half of the group that missed it the first time, so I pulled out a 'The Old Island Fortress' out of Basic Fantasy's BF1: Morgansfort and converted all the monsters on the fly. I wasn't really prepared at all, so we ran it as a standard dungeon crawl. There was no back story or reason (besides a pitiful one I supplied at the beginning). I learned then that my players do not like randomly generating everything, as there was no real attachment. Most of the blame could be put on me for that session, but the important thing is, is that we all had fun that night.

I haven't been able to sell the OD&D, barebones concept to my group yet. I am trying my hardest to do so though. If all else fails, I'll probably start up another Skype group, as I've received a little bit of interest in playing a game like that from a couple of people.

My whitebox experience is a lot smaller than my Complete, as I haven't been a player yet. Though today I do start my first campaign as a player, using White Box and the Wilderlands, and hopefully we'll get an update on that.

I can say, if I ever sell my current group on it, my plan is to buy a soft cover copy of White Box for everyone in my group to have. I may do that either way, to maybe try and sweeten them over to my side ;) They love their options though!

Now I know you may be wondering, 'What about the Core Rules Dizzy?', but I have to sadly announce, I have never ran nor played using Core. I've read through it, and it seems great. I think I would use it at a convention where I didn't want whitebox, but didn't want to go all out with Complete. For me though, it is a middle of the road mix of bare bones lbbs and AD&D lite. I think it will be most useful for me to mine ideas out of for White Box, but I don't think I'll be playing it anytime soon. Nothing against it, but the other two versions already encompass the two things I am looking for. I would love to play in a game using it, but just haven't had a chance to do so yet!

With all this said and done, Swords & Wizardry, thank you for everything you have brought to me, and to gaming. You showed me the light to get into Classic D&D and led the torch to lead me to my now love of OD&D. I can't thank you enough. I definitely feel like I will always promote your game, and always try and push it. Thanks to you, 3 of the 5 events I signed up for at North Texas RPG Con are S&W/OD&D with the other two being another two games that I love as well. While I'm there, I'm going to try and run a pick up game using White Box if I can get a group together.

To the entire Swords & Wizardry community, thank you for everything you have done to support this game, and to bring new ideas to the table everyday. You guys brought this game to where it is, and helped make it the success it is. I cannot explain how happy I am to see S&W so highly looked at in the public OSR eye, and to see so many blogs agreeing to post about it today. My blog is just a mish-mash of my thoughts and experiences so far. I really haven't delved into much of what part of my 3.5/PF upbringing has done with my OSR experience, but it does show you, that some of us have been fully immersed into it!

I hope we can do this again next year! and that I'll have more experiences to share, and maybe give some of my own houserules, monsters, etc... for it!