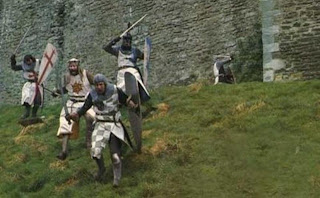 So last night I ran my players through their first adventure in Carcosa using LotFP. I suppose you'd have to use the term adventure loosely, as they didn't get very far. One PC died, within the first 5-10 minutes. 2 hours later, we had an entire TPK.

Most of my players started with me back when we played 3.5, and a few are relative newbies to the game. Running this last night broke me of a habit that carried on from my 3.5 days, and I feel very happy about it. I had still had my DM bones stuck in balancing encounters. Never throwing my party at something they couldn't handle (granted sometimes they needed try some higher level thinking to do so at least).

I suppose, truly, they broke me of the habit themselves (or are starting too, I can't say its completely broken) as the TPK came about due to them angering all the men in the village they were in (first PCs death sort of led to this) and decided instead of running to try and take them on. Luckily, everyone at the table had a blast anyway (even the guy who died at the beginning and was rerolling during the session)! Now they have learned, and I have learned, that they NEED to run (or just try and not piss off the entire village ;) ).

I'm definitely not out to kill my players (as I had been trying to balance it before!), but it feels good to know that when they got themselves into some deep crud, that they still enjoyed it and want to play again. I'm looking forward to loosing that up and seeing what happens :)
Posted by DizzySaxophone at 8:19 PM