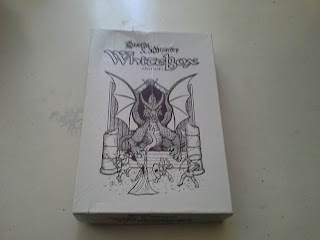 So last night I ran a one shot for my group using my boxed set of Swords & Wizardry: Whitebox, and boy did we have a good time! I ran the included, short adventure: The Vile Worm of the Eldritch Oak. I also included the Thief class someone made for it (though I don't have the link currently. Sorry!).

I asked my players ahead of time what characters they would like to play, and I rolled them up for them ahead of time so we could get right into the adventure. Here is where my new love affair started. One of my players wanted to play a Half-Orc. Of course, that isn't available in white box, but making a new race required practically no work on my part. Look over the other demi-humans to see how they're set up, and just wing it. And winging everything is so easy. I rolled up 4 PCs in less than 10 minutes. All my players had to do was give me a name, and what weapon, which really doesn't matter since we stuck with the non-variable weapon damage. Which leads me another love of the system for me. I had never used non-variable weapon damage, and always thought it was rather dumb. How I have changed over the years! It was so nice to hear so man "How much does my short sword do again? oh wait, 1d6 duh...". Combat went really quick too. Very few modifiers to use, and with using Ascending AC (I know, got ahead and grit your teeth. Remember I started with 3.5! and while I have no qualms with Descending, I still prefer Ascending), combat flew by. 5 combat rounds took little to no time to complete. Attributes meaning very little was a nice touch too. Since you need at least a 15 for a positive modifier, and you only get a +1 (if you even use that optional system) fiddling about is real quick. The rules were just nice and lightweight where I didn't have to worry about any on the fly rules calling. And since I have the boxed set, looking up a rule isn't too tough since it is easy to tell which booklet it will be in. If this is at all similar to how lbb OD&D feels to play, I will be on a new quest to buy some of those originals soon!

The players were even lucky enough (Luck truly was the deciding factor here) to survive! The managed to defeat everything, and even save the shepherd in time. The thief however ended up paralyzed, but they saved the day!

The more I think about last nights session, the more and more I realize how much fun I truly had and how much I loved running whitebox. Swords & Wizardry: Complete will probably stay as my go to system for my standard D&D campaigns, but every time I go to my local store and have some extra time, or run a one-shot, or something quick online, whitebox will probably be my go to system for that. Maybe one day I'll even man up and run a campaign of it (which now thinking of it, sounds like a true joy)!
Posted by DizzySaxophone at 12:12 PM