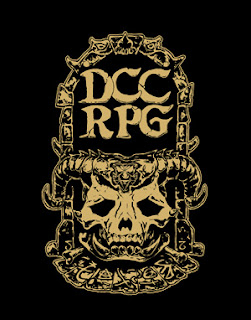 So we finally had our 2nd session of my DCC campaign. Tonight we finished our funnel of Sailors On the Starless Sea. We had 5 players this time. 3 characters survived the last session, but I had everyone make enough that all 5 players had 4 character each.

We ended last time in the tower, so the remaining PCs decided to go up the stairs and see what was up there. Inside they found 17 other captured villagers you were all chained to the wall. They rescued them, caught up with what they knew, then cautiously continue don there way. They went downstairs from the keep and one of the PCs was picking up the fallen gold pieces. They rushed into the next room to find the giant pool. They decided to take 4 of the cloaks, and were creeped out by the pool and the pictures on the wall. After seeing the skulls float to the top they investigated heavily. 3 of the PCs dove down to find the floor of the pool was littered with them, while one pulled the drain and was sucked to his death. After the pool was done draining the others decided to climb down and find what was inside. They were surprised by the natural cavern, but did decide to take the time to search it out. They found a ring on one of the finger bones, and were quite happy to try it out later.

After they grew tired of the cave they climbed back out, and headed out of the pool room to continue down the stairs. The party just did not understand why the skulls continued to glow brighter as they continued on their way. Eventually they made it to the stone wall and climbed ontop. They saw the ship out at sea and weren't sure what to do. One PC decided he'd swim out to it, but it wasn't very long before 7 tentacles came out of the water and dragged him under. They managed to find the candle and lit it and the ship came to shore. A few of the party members climbed on board, but the rest were too scared to do so. Next thing one of the PCs bit off the top of the candle and the ship headed out to sea. They were caught off guard when the boat stopped and the tentacles started to attack again. They fought hard, and a couple even managed to escape it's grasp, but after it took a couple of sacrifices on its own, the ship headed on its way again.

The PCs heard the sound of drums beating. They watched as the glow of the tower came ever closer, and as the shadowy figured became bigger and bigger. Eventually the ship docked itself. The PCs noticed the beatmen had some similar robes, so they hid the halfling underneath one with one of the other PCs and tried to sneak their way up. When they got to the top the Shaman and his acolytes were not fooled and the acolytes began their attack. The PCs got lucky and knocked and acolyte into the lava, but he drug one of the PCs with him. Afterwards the shadowy demon came to live and began his assault on the PCs who dare to keep him there. The Shaman joined soon after he had finished summoning him. After a long and deadly battle, the PCs managed to slay all those who remained on top of the tower. One got some tied up villagers and brought him to the boat, while another jumped into the sea as the tower began to shake and fall apart. Those who made it onto the boat were stunned as a tidal wave came and carried their boat out into the abyss. Who knows where they will end up, but 2 PCs survived to level 2.

So I felt like I had a better understanding of DCC this session. It didn't take nearly as long for me to look up some things like crit & fumble charts. We all had a great time, and it opened with some brilliant roleplaying. I had to fudge and modify some of the end because 75% of the party refused to get onto the boat. I'm not sure where I'm going next, but I think I'm going to have the boat sail out to a foggy island and to start with Judges Guild "Caverns of Thracia."

Posted by DizzySaxophone at 4:02 PM