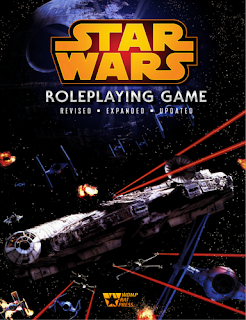 We had our second session of our new campaign a couple of weeks ago. The game is starting to speed up I feel, but we're still getting used to it. We had some newish players that still need a better understanding of the rules, as it took us nearly 30 minutes to get started after going over their character sheets. At some point, someone besides Norrible and I will have some understanding I hope. Norrible is growing as a DM, but still needs to streamline his game a little bit. Still waiting for session that doesn't go on quite as long, as we start late and you can start to feel the fatigue near the ends. His new 'minion' ruling we worked on together helps alleviate some of the burden of combat, but I feel we may still be too combat oriented.

We had a great time though! We started we me learning my nav computer is what was wrong on my ship. I learned that I can fix it myself if I have the parts, but I still put in our favor to try and get the ship repaired while we were out.

We decided to check out the bounty office for more work. We had a very... vague job opened up to us, that had nearly no info, but pretty good pay so we took them up on it. We bought a speeder and headed out. On our way there we found an abandoned moisture farm with smoke coming out (ala Episode IV), so we stopped in to see what was up. Once there we found some members of the First Order assaulting some Resistance fighters. We were quick on the draw and easily took out the storm troopers and some of the officers, saving 2 of the 3 resistance soldiers. We talked with them about what was going on. They were there to discuss open transport with the Hutts, but apparently the First Order found out and staged an ambush. We gave them my name, with the offer of a favor from them.

We heard about some kidnapped Resistance officers in a hideout somewhere nearby, and figured that was our mission so we headed out. We found a small compound, heavily guarded by the First Order. Finally Lord Rorikon came in handy, and he persuaded some of the soldiers into letting us in. We managed to make it all the into the cell where the guys were being held up before we had any confrontation. Lord Rorikon was a master of playing himself off as their superior using the knowledge he learned back when he was a consulate for them. d'Artagnian and I were playing along as his body guards. The jailors were just torturing the captive Resistance fighters. Rorikon was up in the jailors face about how they were due to a transfer and that we would be taking them. They didn't buy it this time and eventually a fight broke up. The kid and I were quick to draw and kill the officer torturing the guys and took both doors in a defensive manner. I went north and the kid went south. They had some robotic man come in through their blast door, while I just had a slew of storm troopers and officers. We gave one of the healthier Resistance captives a gun to help out, but get got a little to hasty, charged, and got himself killed. I had Rorikon use his comm link to get in touch with the Resistance, give them my name, and ask for back up as we had their captives and were trying to escape. Once we secured our current location, we headed back the way we came in. We didn't meet much resistance as we broke the guys out and got them back to safety.

This session was pretty interesting. Although it was long, and took some time, we did manage to sneak by most of the danger thanks to Lord Rorikon. d'Artagnan and I were able to roll through most of the combat afterwards, and this put us in position to join the Resistance if we want to. We're still just trying to get the hell off of this planet, as I need the money off of Rorikon to help pay off my debt. We're well on our way to doing that though! I'm certainly interested to see where our game goes once we're off planet!

Remember these are NSFW


Posted by DizzySaxophone at 12:05 PM